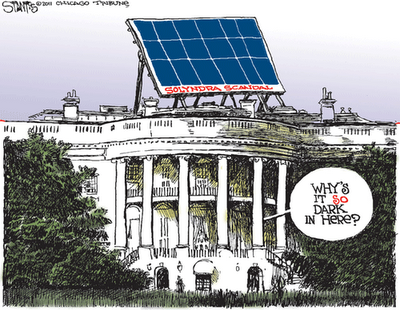 Watching Secretary of Energy Steven Chu face nearly five hours of grilling by a congressional committee seeking answers to the multi-billion dollar loss taxpayers have taken after the department dispensed their money in pursuit of its Green energy program was a reminder that ideology is not a substitute for reality.

Dr. Chu received a Nobel Prize in Physics in 1987 for his work at Bell Labs, shared with colleagues, on cooling and trapping atoms with laser light. At the time he was appointed to head the Department of Energy, he was a professor of physics at the University of California, Berkley. He also had gained notice as an environmental enthusiast advocating a shift away from fossil fuels—coal, natural gas and oil—to combat “climate change.”

At one point Dr. Chu thought that painting roofs and other structures white would help reflect the sun’s radiation and save the nation and the world from global warming. Another nutty idea of his was a global “glucose economy” to create a “low-carbon economy” by shipping glucose from tropical plants would replace oil, the energy source that fuels transportation worldwide and serves a multitude of other uses.

Why any of this nonsense qualified him to be the chief administrator of the Department of Energy defies understanding. A footnote to this is the fact that the Department was the creation of the failed presidency of Jimmy Carter whose “windfall profits” legislation drove much of the oil industry out of America despite the fact that the U.S. sits atop some of the greatest deposits of oil in the world.
The loan guarantees of grants made by the Department of Energy are turning out to be a huge scandal for the Obama administration, rivaling the Department of Justice’s “Fast and Furious” gun-running program to the drug cartels of Mexico. When you toss in an unemployment rate that rivals that of the Great Depression, it is hard to understand why anyone would suggest that Obama will be reelected.

As reported in The Washington Post in September, “A $38.6 billion loan guarantee program that the Obama administration promised would create or save 65,000 jobs has created just a few thousand jobs two years after it began, government records show.”

We are now familiar with the Solyndra scandal, one of the companies that received loan guarantees despite grave misgivings of DOE staff members. It declared a very predictable bankruptcy as a manufacturer of solar panels. Its failure was blamed on competition from China, also a major producer of wind turbines.

Between solar and wind technology, the failure of these two Green energy producers touted by the Obama administration, is beginning to be noticed at the same time the Environmental Protection Agency is hell-bent on closing down coal-fired electrical power plants and the companies that mine coal.

Another DOE beneficiary was BrightSource, another solar firm which received a $1.4 billion bailout. It turns out that the DOE officials involved was Sanjay Wagle, formerly a principal in Robert Kennedy, Jr’s firm. In 2010, BrightSource whose largest shareholder was Kennedy’s VantagePoint Partners, had $1.8 billion of debt obligations and had lost $71.6 million.

Just how many billions the Obama administration’s Green energy program will have lost by the time they are eventually calculated will be testimony to the general failure of solar and wind power. Meanwhile, the Sierra Club is celebrating Obama’s decision to delay approval of the Keystone XL oil pipeline, estimated to generate 20,000 jobs.

The Department of the Interior has just delayed shale gas drilling in Ohio “for up to six months” and an industry group estimates that drilling in the Utica shale affected by the delay would produce 204,500 jobs by 2015.

In mid-November, Lisa Murkowski, a Senator from Alaska, wrote an opinion published in The Wall Street Journal, noting that the Obama administration’s proposed expansion of offshore oil drilling in the Arctic Ocean and the Gulf of Mexico are its first concession since its moratorium on drilling in the Gulf. The administration still opposes offshore drilling on both the Atlantic and Pacific coasts.

Sen. Murkowski pointed out that “Cuba, Mexico, the Bahamas, Canada and Russia are all moving ahead on offshore development adjacent to our borders,” noting that according to the Department of Interior, “our offshore areas hold more than 86 billion barrels of recoverable oil and 420 trillion cubic feet of natural gas. The Artic Oceans is projected to hold 20% of the world’s undiscovered oil and gas.”

Why anyone thought Dr. Chu was qualified in any fashion to run the Department of Energy defies the imagination. Why anyone still believes that solar and wind energy can replace traditional proven sources of energy is testimony to environmental propaganda and myth-making.

Green energy is simply one more way the Obama administration has set about destroying America’s capacity to generate the energy needed for everything requiring electricity. It is one more way to impoverish the nation. And he is running for reelection in 2012.