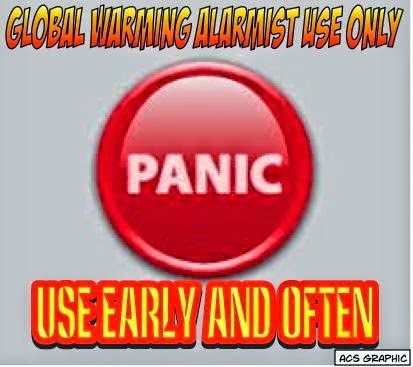 The continuing drama of a President willing to lie about the climate continues with the release of a report, the National Climate Assessment. It is a repeat of all the lies that have been generated by the UN Intergovernmental Panel on Climate Change.

“The climate report,” said Dan Kish, a Senior Vice President of the Institute for Energy Research, “bears a strong resemblance to the IPCC report, only with less science and more rhetoric.” It is “just another attempt to justify more government intervention in American’s lives and more attacks on affordable energy and economic growth.”

Like Obamacare, the new report is, said Kish, “intentionally confusing and misleading.”

“Throughout his entire presidency,” said Kish, “Obama has promoted policies that have discouraged the use of our vast energy resources, including blocking the Keystone XL pipeline, slowing energy development on government lands and water, and forcing new restrictions on all forms of energy that Americans have used to become the number one economy in the world. Under this administration, even cows are not spared as emission sources that must be controlled in Washington.”

Marlo Lewis, a Senior Fellow at the Competitive Enterprise Institute, writing on Fox News, identified the political agenda of the climate report “designed to scare people and build political support for unpopular policies such as carbon taxes, cap-and-trade, and EPA regulatory mandates.” Item by item, he noted the lies put forth by the report.

The American Coalition for Clean Coal Electricity responded to the latest climate report in a comparable, direct manner. Laura Sheehan, a Senior Vice President of the ACCCE, said, “Instead of flying his cabinet members around the world, President Obama and his deputies should take time to visit communities impacted by a much more dangerous threat; this administration’s costly regulatory crusade.”

“The Obama Administration,” said Sheehen, “consistently fails to acknowledge the enormous industry investments and advancements in clean coal technologies, place a wholly unmerited target on our back to achieve political gains; when in reality, America’s coal fleet is responsible for nearly 40 percent of our nation’s electricity and just a tiny fraction of the world’s carbon emissions.”

“Thanks to the industry’s investment of $188 billion, major emissions from coal-fueled power plants have been reduced by nearly 90 percent,” said Sheehan. “The industry plans to invest another $100 billion over the next decade to develop and deploy clean coal technology further reducing emissions.”

Left unsaid is that carbon emissions, as far as the climate is concerned, play a very minor role. Moreover, all those investments have been forced on the coal power industry by ever increasing levels of regulation by the Environmental Protection Agency. The cost is passed along to electricity consumers—all of us—as a necessary increase.

An outspoken critic of the Obama administration’s energy and climate policies, Sen. James Inhofe (R-OK) said, “This report is part of the game the president is playing to distract Americans from his unchecked regulatory agenda that is costing our nation middle class jobs, new economic opportunities, and our ability to be energy independent.”

The report comes at a time when numerous polls demonstrate that climate change is a very low priority for most Americans. A Wall Street Journal/NBC poll in January found that “climate change” ranked last on a list of l5 issues when people were asked which ones the administration should make its priorities.

IER’s Kish deemed the climate report “a scare tactic designed to excuse the President’s agenda of centralizing power in Washington and making energy more expensive and jobs harder to find.”

A new report, “Climate Change Energy Power and National Power” by three retired U.S. Navy admirals reviews the Obama administration’s 2010 “National Security Strategy” has just been published by The Heartland Institute. The authors warn that “The U.S. government is defaulting on its responsibility to develop and execute a credible national energy policy. This failure is suppressing the nation’s economy and reducing the U.S. influence in world affairs.” Administration demands that the Navy and other elements of our military use biofuels rather than traditional sources of energy put it at risk to defend the nation.

“The U.S. economy remains dependent on OPEC (Organization of the Petroleum Exporting Countries) at a time when development of burgeoning natural fossil fuel resources could move the nation toward strategic energy independence.”

What a different nation America could be were it not for Obama’s deliberate attack on the coal industry in particular and other fossil fuels, oil and natural gas. In the name of reducing emissions, Obama deliberately ignores the increasing use of coal in Europe and nations that include China, Japan, and India.

The emissions limits the White House wants and continues to impose would constitute less than a faction of a single degree Fahrenheit over the course of a decade or more. In short, nothing.

For pure incompetence, Obama rates highest among all former Presidents, but for pure deceit he ranks as the most dangerous President ever elected.