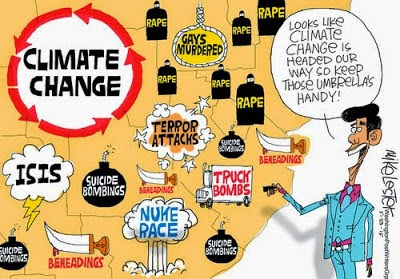 “Woe to the land that’s governed by a child.”  - Shakespeare, Richard III

I have been wrestling for some kind of explanation why the President of the United States, Barack Obama, would continue to talk about climate change and urge the global transition from fossil fuels to wind, solar and bio-energy. I have concluded that he thinks everyone, not just Americans, are idiots.

We know he lies about everything, but these two topics are clearly near and dear to his heart.

My friend, Paul Driessen, is a policy analyst for the Committee for a Constructive Tomorrow, a free market think tank. Among the pundit class he’s ranked very high by his colleagues. Here’s what he has to say about climate change:

“Earth climate always has changed, is always changing, and always will change—but not from fossil-fuel use. Solar fluctuations, deep ocean circulation patterns, and other powerful natural forces have driven climate change and weather events throughout Earth’s history and will continue to do so.”

“President Obama’s hubris is breathtaking. He now thinks an army of regulators can control our planet’s temperature and climate by tweaking emissions of plant-fertilizing carbon dioxide, a mere 0.04% of the atmosphere.”

Driessen and I look at and listen to Obama and wonder if others too see and hear someone uttering some of the most absurd claims about the climate. Then we worry that this someone is the President of the United States with the power to turn his ignorance into national policy.

At this point we have suffered his initial failure to respond to the recession he inherited from the 2008 financial crisis. More than six years later the economy has barely moved toward a normal rate of growth. Then we were gifted with ObamaCare and the disruption of what was widely regarded as the best health system in the world. And, for good measure, he imposed Common Core on an already weakened educational system. It is being repealed and opposed in many states. For good measure, his foreign policy, if he has one, is widely regarded as a total failure.

How is it a former “community organizer” possesses a seemingly vast understanding of meteorology? Did they also teach that at the Harvard Law School? “Climate change,” said Obama, addressing a graduating class of the Coast Guard Academy, “constitutes a serious threat to global security, an immediate risk to our national security, and make no mistake; it will impact how our military defends our country.”

“Our military and our combatant commanders,” the President told the Academy graduates, “our services—including the Coast Guard—will need to factor climate change into plans and operations, because you need to be ready.” For what? For a rainstorm? For snow? Wind?

This is the same President who sees no threat to our national security from Iran whose leaders shout “Death to America” every day when they aren’t also shouting “Death to Israel.” He has zealously been pursuing a deal that would enable Iran, the leading supporter of terrorism, to have nuclear weapons. Meanwhile Islamic State (ISIS) is taking over more territory in northern Iraq and into Syria. Obama might as well be dropping bags of marshmallows on them.

He blamed climate change in the form of “severe droughts” for the rise of Islamism in the Middle East and Africa. Someone needs to tell Obama that there have always been severe droughts somewhere on the planet, and floods, and forest fires, and blizzards, and hurricanes. Even so, in the last eighteen years, there have actually been LESS of these natural events, along with the flatlining of the planet’s overall or average temperature—there has been no warming!

Not content to blame climate change for the rise of terrorism, the White House issued a report that was described as “a doomsday scenario of health, security, economic and political issues.” The thing about climate is that it measured in centuries, not years. As for the weather, while records are maintained, it is usually reported as today’s news with a forecast of the coming week.

So you shouldn’t be surprised that the report blamed “asthma attacks” on climate change!

Suffice to say there isn’t a glimmer of hard evidence to support anything the President is saying these days about climate change.

And this is the same President that wants the U.S. and the rest of the world to give up the use of fossil fuels—coal, oil and natural gas—to “stop climate change.”

IF Obama’s climate change idiocy is just a way to distract Americans from the real problems we have encountered thanks to his failure to address them, then it is purely cynical and political.

IF Obama really believes this stuff, he is unfit to be President.