Obamacare is All About Death and Taxes 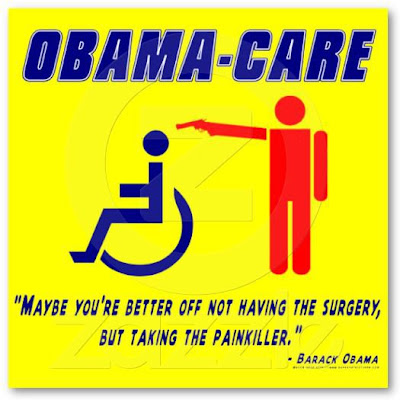 Prior to the November elections, I received an email that was chilling. It was about the new Obamacare rules. Before I discuss the Obamacare taxes that are kicking in this year and next, I want to share excerpts from it.

The email was from an individual whose son-in-law has a brother who is a surgeon at Emory Hospital in Atlanta. It is ranked high among American hospitals. This is what he related:

“A group of non-doctors, from 'our' country's Department of Health arrived last week at Emory for a two day session and is on their rounds around the country to make sure every hospital fully understands the new rules (which start in December (after the elections) concerning treating all patients over 70 years of age.”

“This group informed the staff Emory and all the doctors present that they will very soon not be allowed to operate on anyone over 70 (no matter how urgent or life threatening the situation is), without first having it approved by a board of eight doctors. Failure to comply will result in a huge financial burden to the hospital and more than likely the doctor will lose his/her ability to practice medicine anywhere in the country.”

“This board is to be established at every hospital in the country and the board members will only work eight hours a day…the DOH group almost got lynched at this point by the doctors who were present. The point that got the Emory doctors so upset originally was that the "Death Board" will be available only 8 hours during the day. And once their 8 hour shift is up, they may have to wait 16 hours to get in touch with them and another hour or two or three to get a decision and permission to operate.”

This is, however, anecdotal. Despite efforts to confirm whether this is a new, official policy, no confirmation could be found and, it should be noted that there have been numerous efforts to debunk what former Alaska Governor Sarah Palin dubbed “death panels.”

If the report of the visit to Emory Hospital is accurate, fears of death panels are true. If you or a member of your family is over age 70, Obamacare could lead to denied service and even death. According to an article in a December issue of U.S. News and World Report, this process, is also likely to include women seeking mammograms to detect breast cancer and even premature babies and infants in need of preventative treatment for a virus. So every American is now at risk if they have life-threatening health care needs.

If this seems fanciful, consider reports out of the United Kingdom where they have had socialized medicine for decades. There, both the elderly and sick babies are at risk of being abandoned by National Health Service hospitals.

Officially called the Affordable Care Act (ACA), Obamacare will surely migrate into a bureaucratic death sentence for an American healthcare system once deemed the best in the world.

In the course of the “fiscal cliff” negotiations Congress actually repealed a section of the ACA, the Community Living Assistance Services and Supports affecting people who need long-term care. It is likely that as the 2,000-plus pages of ACA are examined in greater detail by Congress, further dismantling will occur. It needs to be entirely repealed, something the House voted for, but which was deep-sixed in the Democrat-controlled Senate, and Obama would surely veto any effort to do so.

Obamacare’s taxes have arrived and they include another investment tax increase for taxpayers with taxable income exceeding $250,000 ($200,000 for singles). There is also another payroll tax increase of 0.9 percent in the hospital insurance portion of the payroll tax. There is a new tax on medical devices of 2.3 percent affecting manufacturers and importers on all their sales. This increase will be passed along to consumers.

These ACA tax increases are in addition to a variety of other deductions that taxpayers have previously been allowed to take; in addition to a death tax increase there was the elimination of full expensing of capital purchases.
The news about Obamacare just keeps getting worse. Actuaries at the management consulting firm Oliver Wyman are predicting that the law’s age rating restrictions could mean a 42 percent hike in premium costs for people aged 21 to 29 when buying individual coverage.

After the Supreme Court ruled that ACA is a tax, the Congressional Budget Office did an update of its scoring of the law and concluded that Obamacare will spend $1.7 trillion over ten years on its coverage expansion provisions alone, including a massive expansion of Medicaid and federal subsidies for the new health insurance exchanges. This translates to federal health spending by 15 percent.

Infants, the young, middle aged and older, all will find their costs for medical care increase or even be denied. There is nothing “affordable” about Obamacare. It is a draconian threat to every American.